Basking Shark Spotted in Hebrides was Tagged in Ireland

It has been a really great basking shark season for us with perhaps our strongest ever summer in terms of numbers and consistency. The weather is the weather in the Hebrides and as usual it did cause some problems but on the whole it was a pretty decent summer.

One of the days we headed offshore from Coll we were treated to really great sea conditions, numerous shark encounters and a the discovery of an incredible story!

We noticed a basking shark who had a very distinct notch out of the trailing edge of the dorsal fin and the remains of a tag! Laura, after realising the potential importance made sure she gave the tag a clean so she could try and read the information from it. She was in the water with Ernst & Katerina who made sure they documented it and took pics of the tag. There was only a code on it but no other information that we could trace the original scientist! We made sure we took dorsal fin images, along with size, sex and other information before we left the big fish.

Afterwards we contacted the other basking shark groups to see if the code was recognisable to them and the Irish Basking Shark Group found a match! Incredibly the shark has been tagged in Ireland (Kilkee - co Clare) in April this year. 119 days later and 600km away we found a positive match! Our visiting basking sharks do seem to travel past Ireland to the Scottish west coast so the more joint working we can do the better. This was a great example how tourism & science can work jointly for great results!

Check out the news report from Ireland below.  Picture below of Laura cleaning the tag by Ernst Popp. 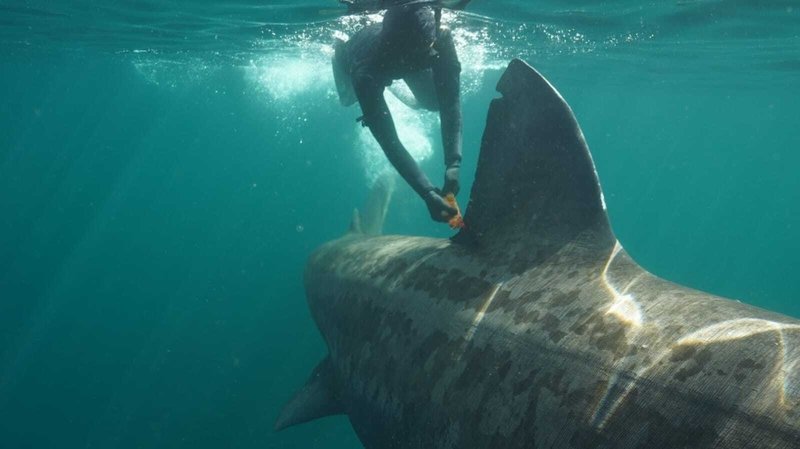