One of the big mysteries with basking sharks is reproduction, where and how do they breed?, where are the pupping grounds? There are ver  few juvenile shark sightings in the Hebrides, leading to the conclusion that this area is not a pupping area. However we have had a few sightings over the years, in fact we were in the water with one of the first juveniles when a lucky passenger Stuart Holmes managed to capture a picture of it. See here for the blog post on that encounter. We do think basking sharks breed in the area due to the courtship and breaching behavoirs seen commonly in summer. 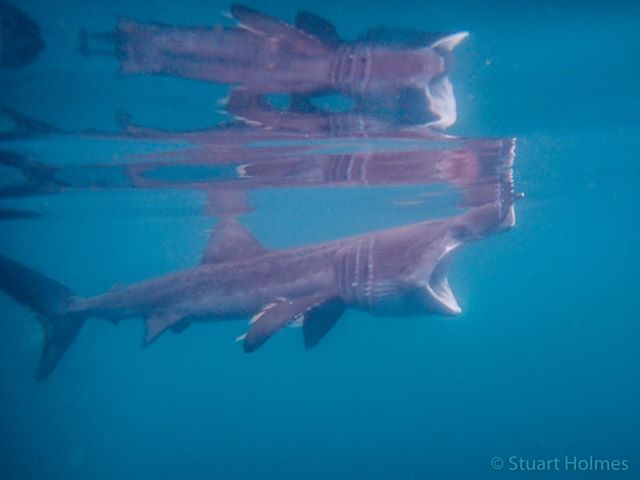 We had another sighting from the boat last week and it was observed to be feeding. However it's movements were erratic in choppy conditions so the situation wasn't ideal to snorkel so we observed it from the boat only.

Juveniles are easily distinguished from adults, firstly by their size as they obviously much smaller. It is understood that juveniles are around 1.6-1.8m at birth. With the average size of adult shark we see is 5-6m and largest around 8-9m (maximum size is thought be 10-12m). However it's their nose (or rostrum) which is the most unique feature. Instead of the large bulbous nose of the adult, they have a small upturned nose with a thin tip. If you can imagine a cross between a mr whippy ice cream and a basking shark nose - then you'll get an idea of the shape!!! There is no definitive answer why they have this feature as a baby shark, some suggest benefits around initial feeding strategies others around development inside mum beside the other pups. It's a super cool little thing anyway, so check out the video shot from the boat. Baby shark, baby shark doo doo de doooo.