We have an active science programme where data is collected by our marine biologist staff on our tours and also during our dedicated research expeditions. We have a variety of areas that we are interested in studying and we have a unique opportunity to do so given the amount of time we spend with them in the world's biggest hotspot. Our passengers can passively assist with this research during our tourism style tours, or with a specific focus during our research voyages.

We are not funded for any of our science work or collaborations, it's all funded from tours alone. We do have students join us but they are usually within the MCI and Heriot-Watt programme. We also run specific research and education trips where we take passengers to assist with data collection and recording. These trips take place during the the southerly migration - see information here about this opportunity.

Please see below for some the areas and specfiic projects we have been studying; 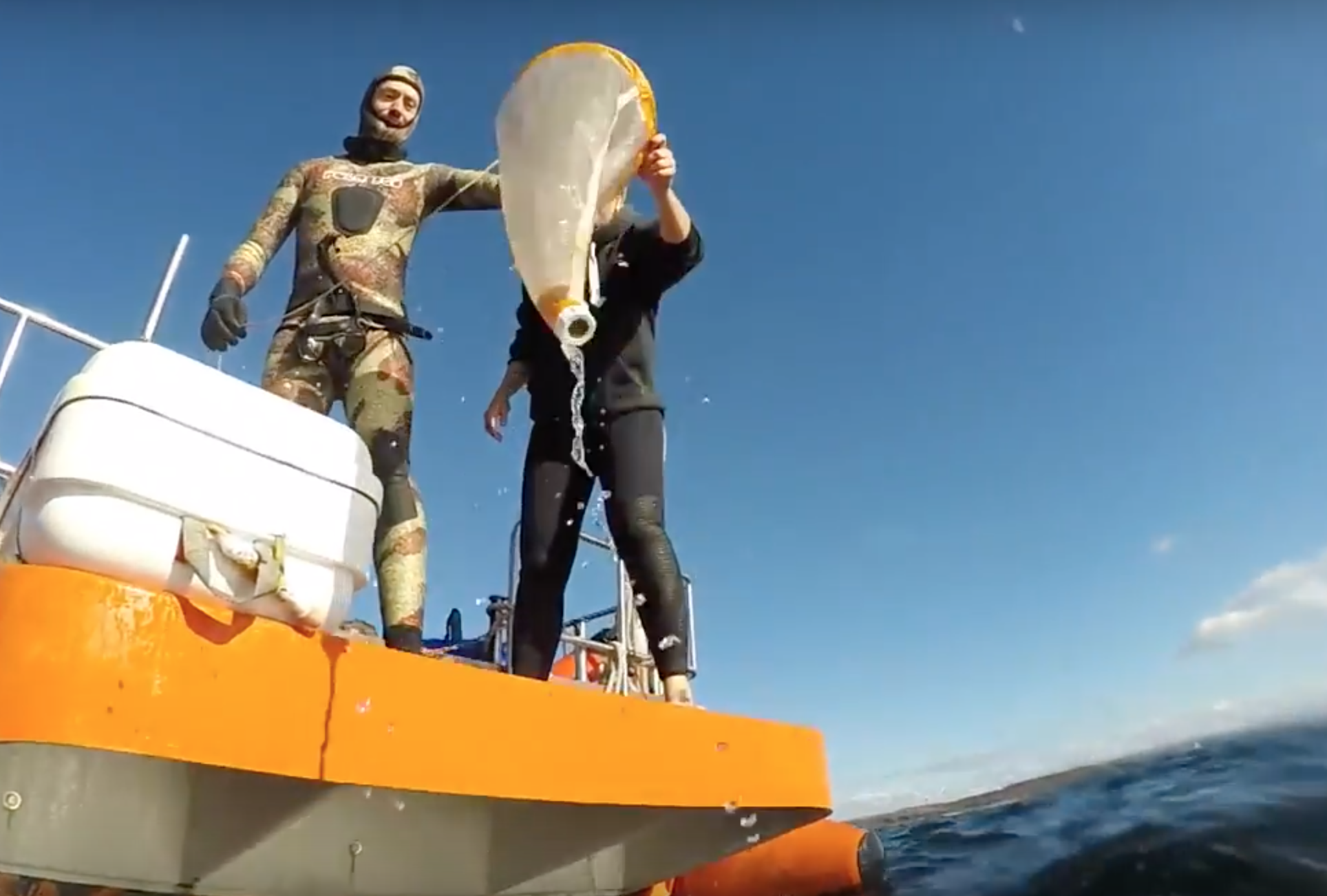 We spend a lot of time with basking sharks and in areas of concentrated plankton, which is great. The unfortunate thing is that the phenomena that concentrates the plankton also does the same for flotsam, debris and plastics. In 2018 we are planning a specific study to try and quantify the levels of plastic that basking sharks may be ingesting using the a similar methodology to our plankton project below. We hope to gain some results in both the Hebrides where we operate in summer and in the Clyde during Autumn. See here for more in depth discussion on this and ways you can help. 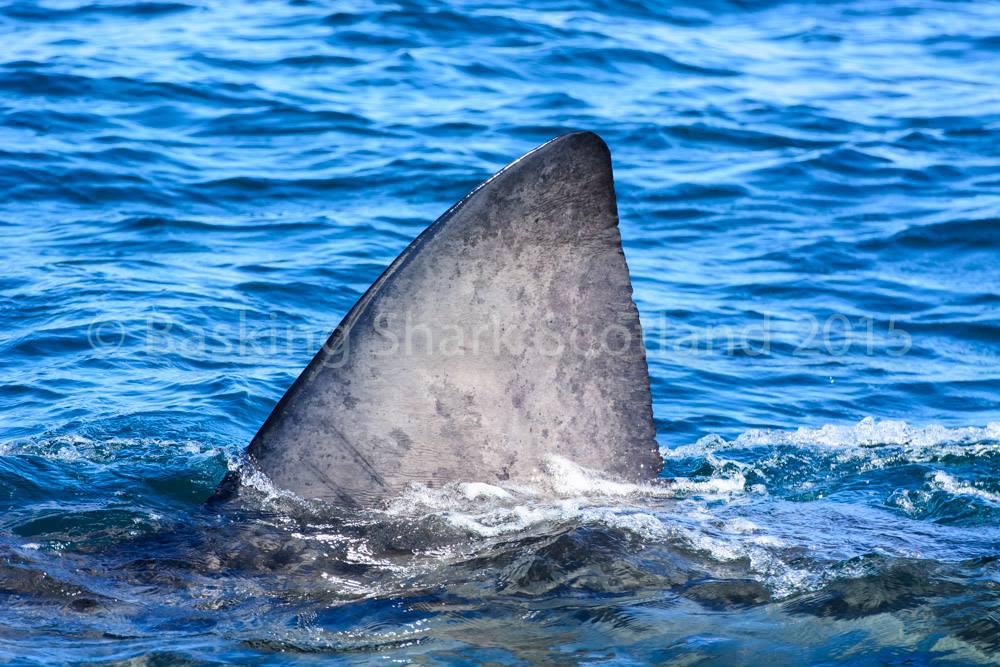 During our tours and research trips we collect data on basking sharks including location, number of sharks, water temperature, shark length, gender, time of sighting, tides and weather along with some of the more specific factors below. This information, in addition to that provided by the public, is building up a sizeable data set of basking shark distribution and abundance with specific factors that would have been unable to be collected in previous surface based studies. 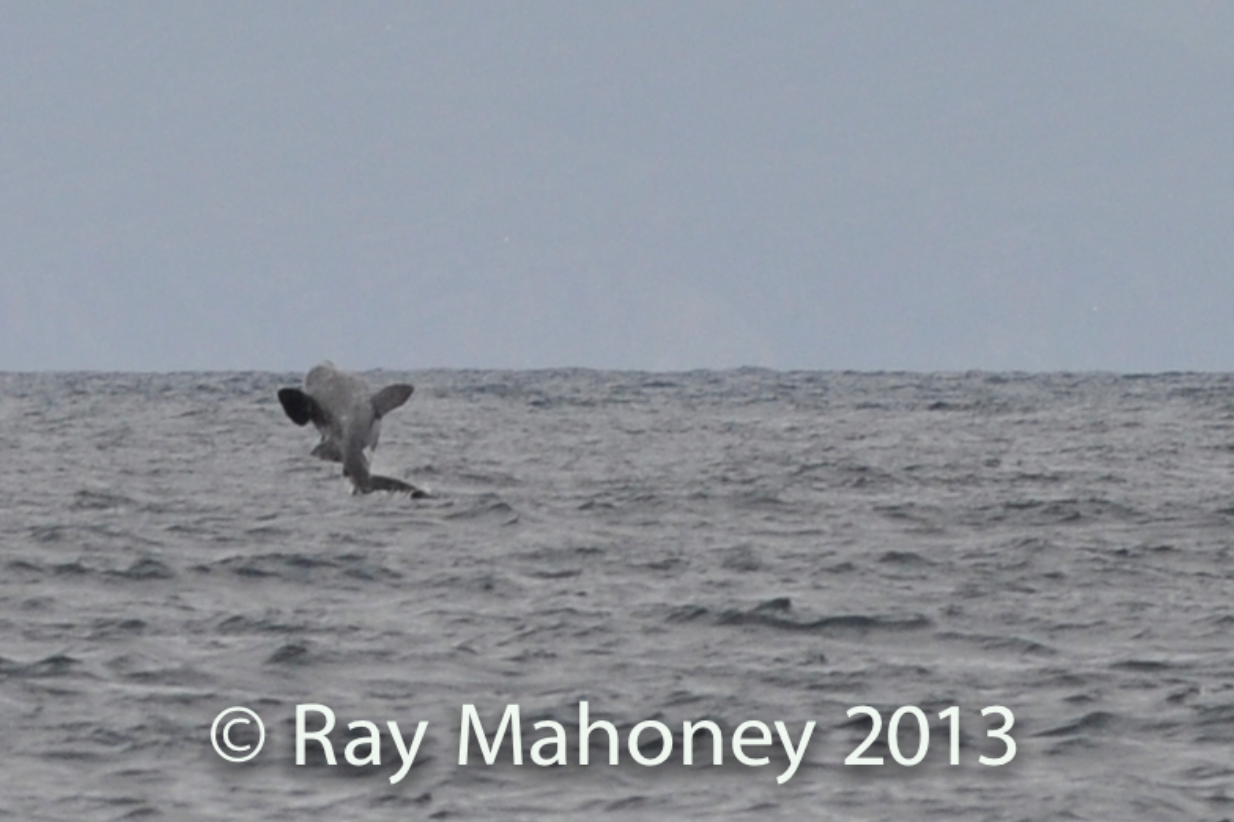 As the large numbers of summer basking sharks is thought to be due to a breeding aggregation we observe a lot of breaching behavior. Sometimes breaching occurs numerous times in a sequence. We record details of breaching, locations and any details of note. In 2016 we narrowly missed recording breaching from a drone however and perhaps more interestingly, we captured the pre-breach sequence where two sharks were on the surface, then dived one after the other then both breached 30m away, again one after each other. We have seen them breach in deep water but also very shallow water (<10m) and in a range on conditions, from flat calm to very stormy. One memorable evening we observed a breach with the backdrop of a stunning Hebridean sunset!See here for a shark breaching caught on Shane's iphone!! 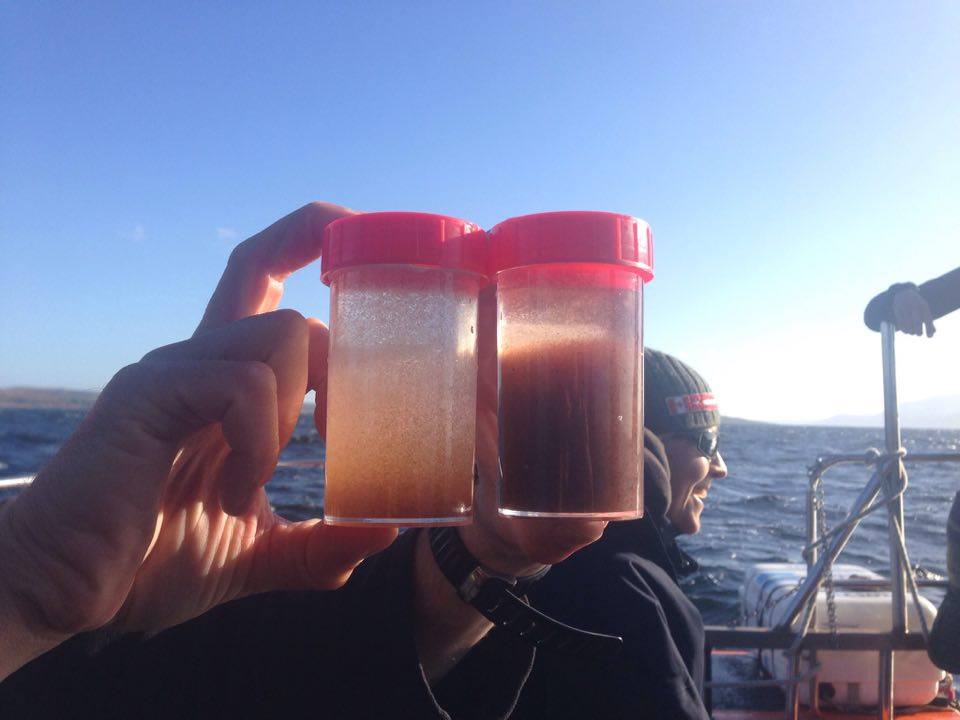 Plankton Sampling
During our trips we collect a number of zooplankton samples for a number of reasons. This can assist us in determining what is happening within the water column as a vital part of shark operations is finding the food then finding the sharks. Unlike trying to find a predatory shark we can’t chum with plankton! These samples are trawled using a small plankton net and during our trips our clients will be able to see what plankton is and what we are looking for. This is a great educational tool and we hope having this as part of our tours can allow our guests to understand ocean processes and threats along with observing amazing wildlife. These plankton analytics are also great as an overall oceanography study with what’s happening to our local ocean over a time period versus varying environmental conditions. Some of our latest studies have been looking at size and abundance of copepods which has shown interesting results which you can see clearly in the picture to the left (no shark vs shark). 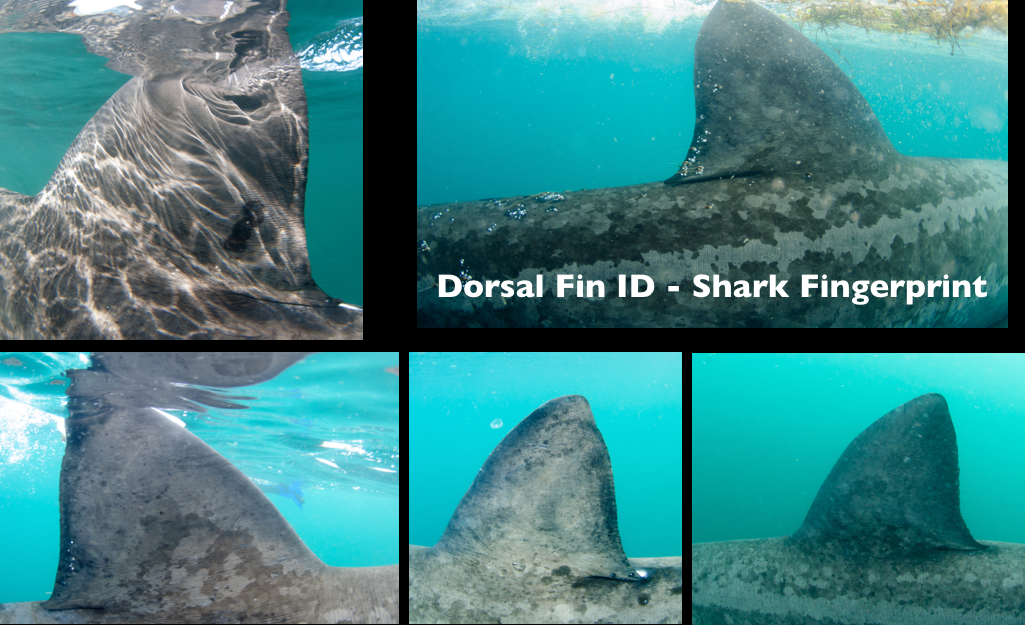 The sharks' dorsal fins act in a similar way to a human finger print with many differences in individual sharks. They can have parasite scars, notches, cuts, blotches and striations over the fin. These features can all be entered into one large database for year-on-year comparison for returning individuals. For the surface based ID shot, you generally only get the top 1/3 of the fin however underwater you get to see the whole fin allowing far more detail to be studied. However we have much more opportunity for surface shots at the same time, so can truly gather both sets of information. One other area we are looking at is lateral line markings which is quite distinctive as you can see from the image on the right. 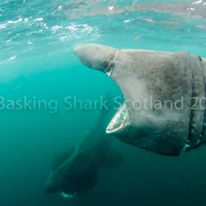 As we are with the sharks all season we are in a unique position to assist the sharks. In 2013 we noticed one that had something wrapped around its' nose (we called it Sore Nose!) and we were able to obtain a license to try and help the shark get rid of the entanglement. Unfortunately we did not see the shark again that season, however the images and video were great to be able to use as an educational tool for marine debris. The best news is that Sore Nose returned in 2014, with a healed nose (shall we change his name??) - the magical healing power of sharks! The other interesting part is that he returned within 10 days and 5 miles of where we last saw him, offering more insight into shark site fidelity. 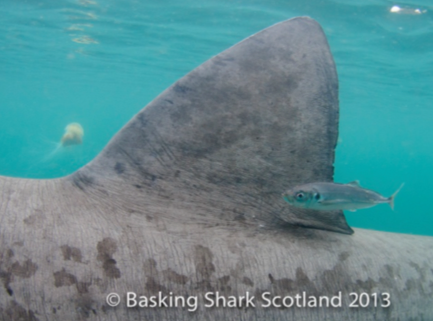 As we spend more time with basking sharks than anyone in the world we are in a unique position to see things no-one else does. One of our ongoing projects is observing piloting fish with basking sharks. This is more commonly seen in tropical waters where pilot fish follow other shark species such as oceanic white tips, however we have observed different species of temperate and sub-tropical fish exhibiting the same following behavior. We have observed this in 2013, 2014 and 2016 and we will continue to observe, monitor and study this. 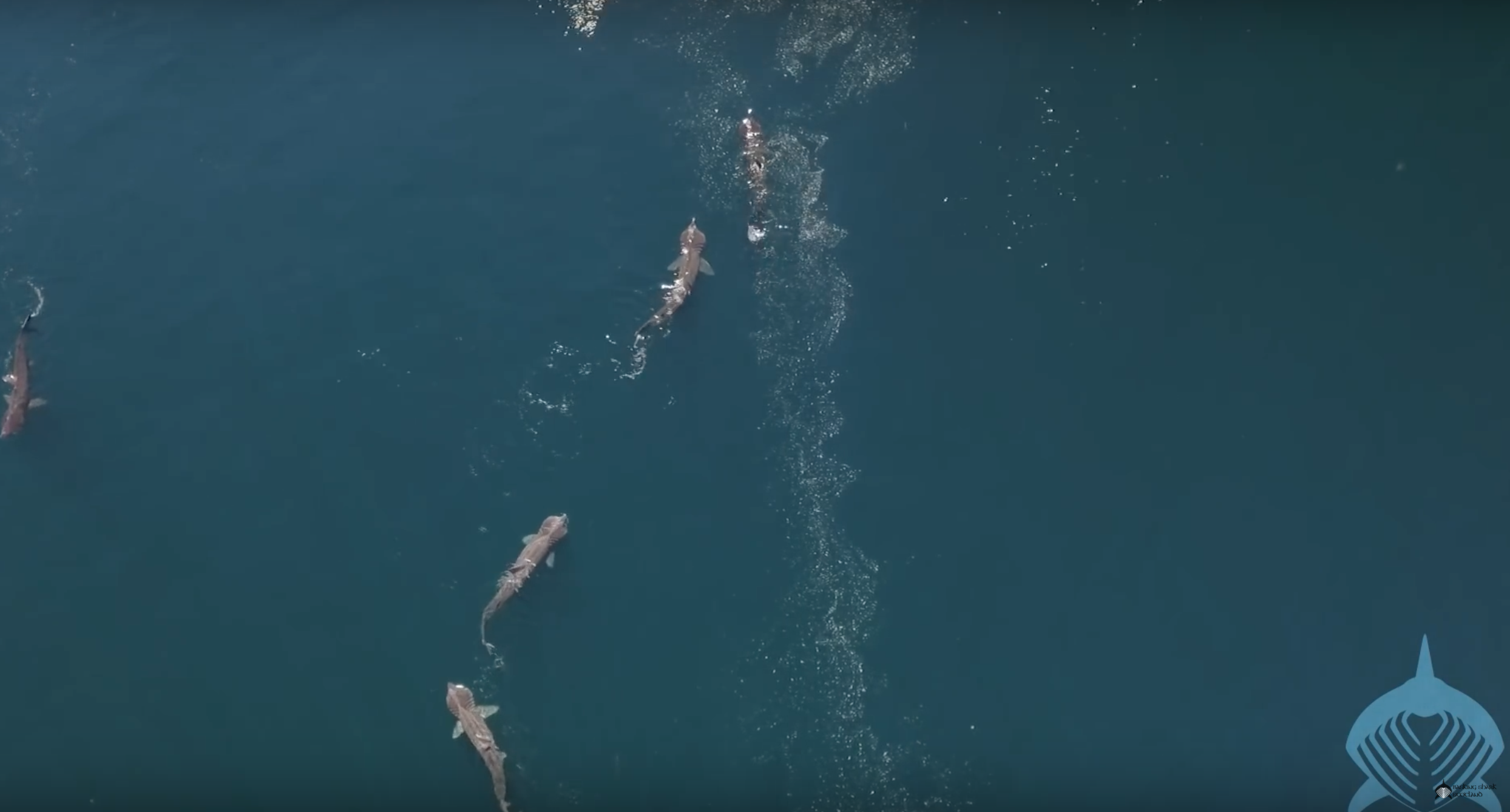 We've been filming basking sharks via drone since 2014 and were the first in the world to do so. Through this we have developed a survey protocol for assessing their behaviour. Have a birds eye view gives us a unique perspective into their foraging behaviour. We've made a number of discoveries on this theme, but we've also used it to assess their reactions towards snorkelers, other sharks and other marine species. It's a highly valuable tool which produces dramatic and exciting results. 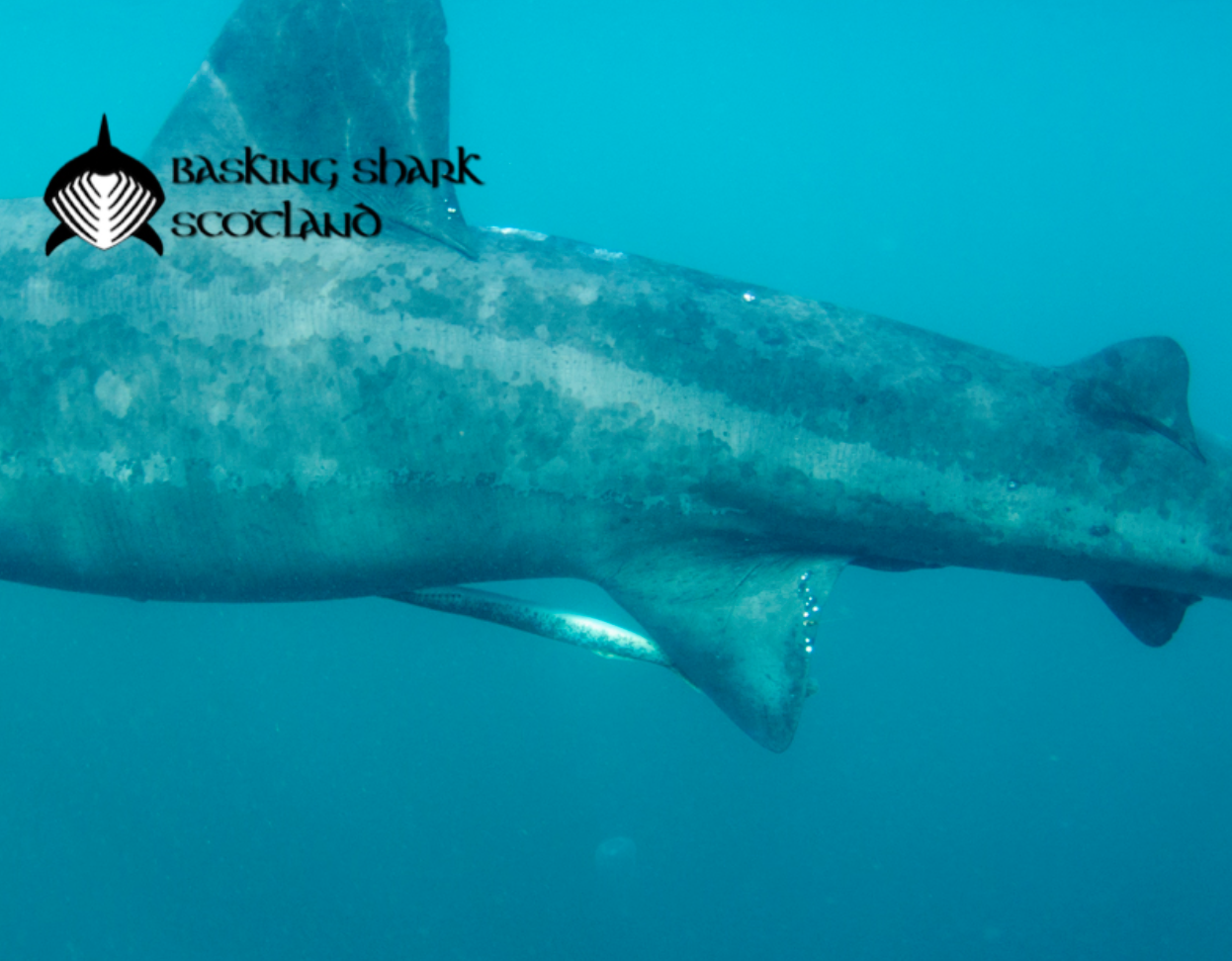 Basking shark are unfortunatly (anthropomorphically speaking) effected by large eel like parasites called lampreys. These strange looking beasts have a horror show of a mouth full of teeth that suck and bite onto the sharks, sucking out the juices. They seem to like certain areas near the anal fins, so it's not a particuarly pleasant thing to think about from a human perspective. How they effect the sharks, and if indeed they effect them at all is unknown.  However we endevour to monitor their presence, how many are attached to individual sharks, location on the shark and compare this to the rest of the distribution infomation we gather above. It's unknown how and where they attach themselves but  we have a unique position to able to shed some light on this mysterious aspect. 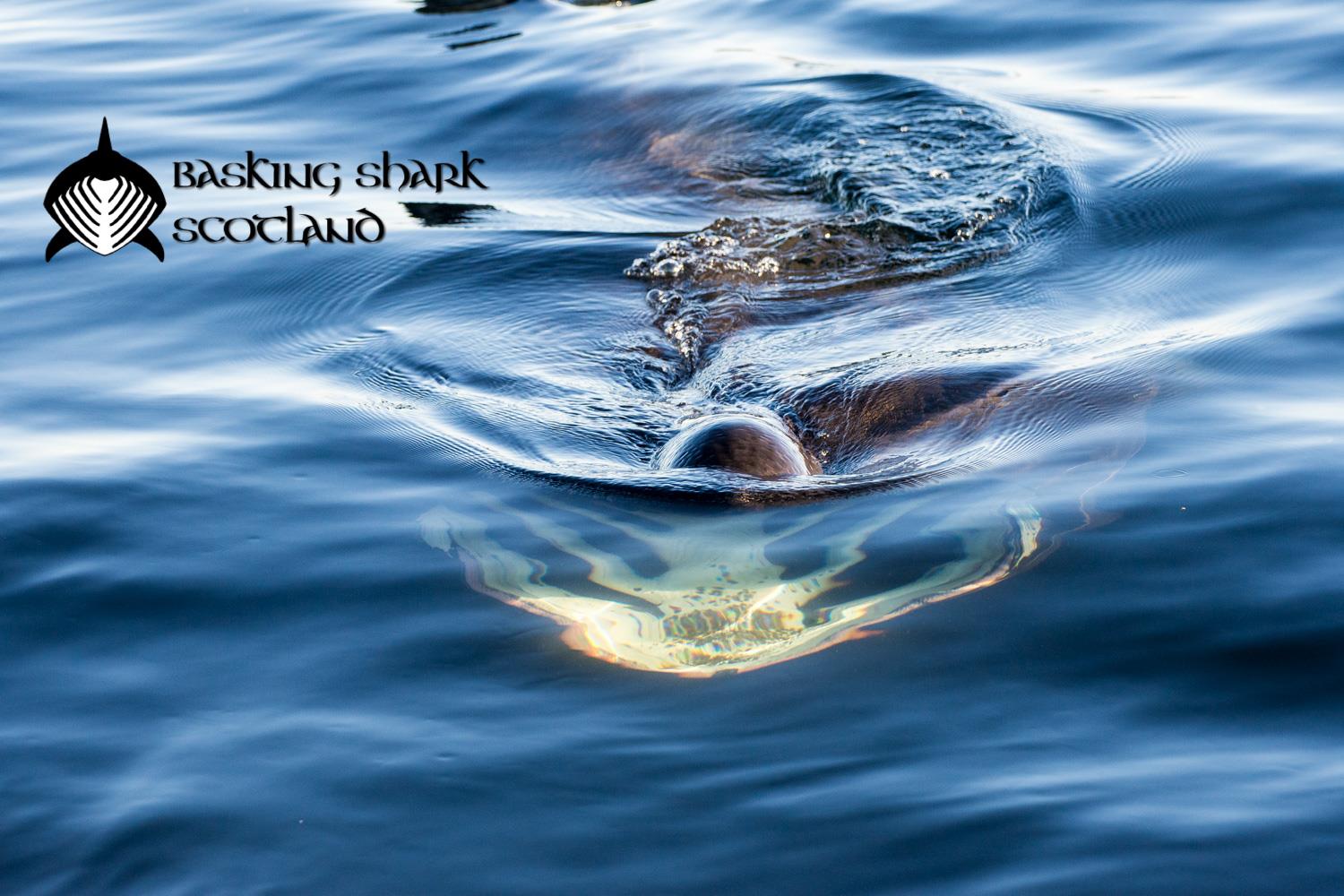 We operate a public sightings database where members of the public submit their basking shark sightings within Scotland. There are other organisations that collect Irish, UK, or England/Wales data but we try to endeavour to study the Scottish distribution which is more manageable. Sightings have ranges from Shetland to the Borders, and we also have rare sightings such as offshore, Iceland or Norway out of interest. The Scottish basking shark sightings help build up an overall picture of where species are moving and time of year. This level of citizen science can really help and we encourage everyone on the water (or from the shore) to join in. See here to fill in a sightings report. 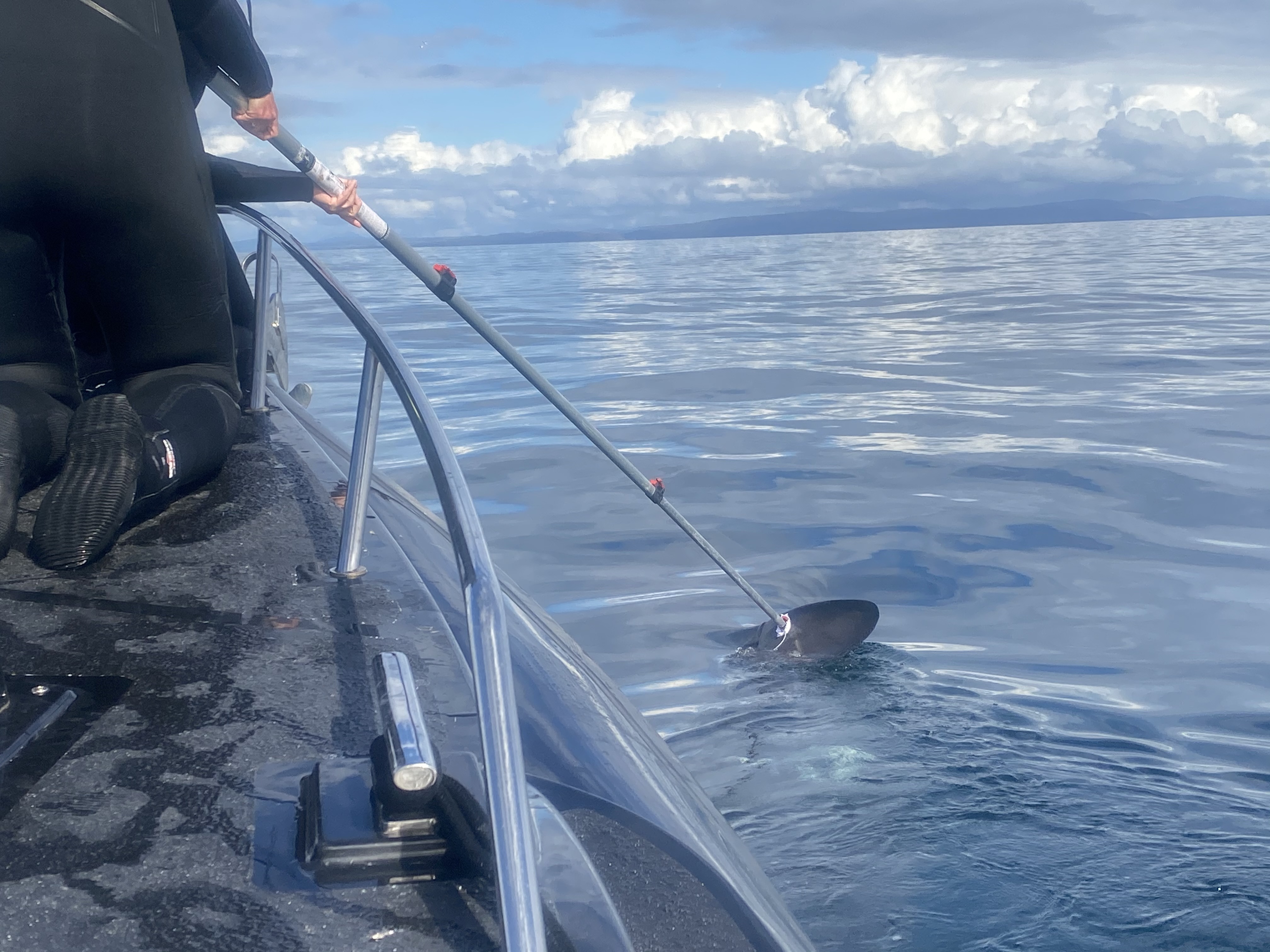 In collaboration with many others we are contributing to the large basking shark genetics programme. The aim is to try and sample as many basking sharks as possible to determine how closely related they are genetically. Our methodology involves firstly aiming to obtain a basking shark passport e.g size, markings, sex, photo ID if possible. Then using high-tech equipment of a window washing close and sterile swab to obtain some skin slime/mucus. These samples are fixed in preserative and then stored for analysis at the lab. The project has big aims and we hope it will reveal some really interesting science in the years to come.