Top 5 Cetaceans around Oban & The Hebrides

We're lucky to operate in an area with a high number of whales, dolphins and porpoises. Some are resident year round, others migrate here for the summer, others are transient and pass by from time to time. This is our top 5 list of cetacean species. We couldn’t agree on how to number them, so they are listed alphabetically! 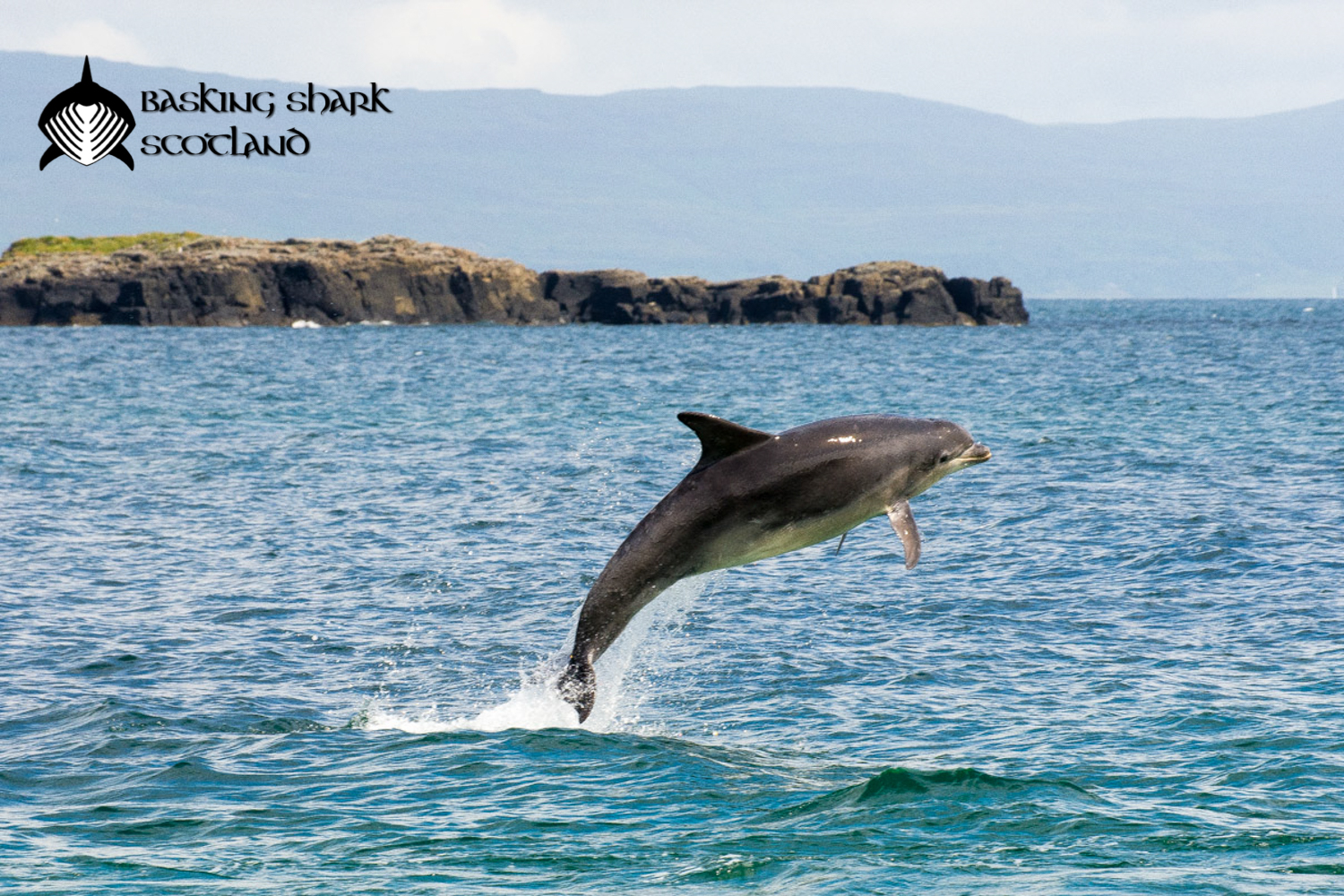 This is our largest dolphin species (if you exclude orca) and we have two resident populations on our door step. One which usually lives around Mull and the other in the waters surrounding Barra. With our summer base on Coll being located in the middle of the two, we sometimes see members of both groups. These dolphins are present in many locations around the world but the ones living in the Hebrides grow much larger than their warmer water cousins. They are the most northerly located population of this species and so to cope with our temperate conditions have grown super size! These dolphins are very social and we see them both offshore and very close to the coast. We’ve watched them socialise, hunt, play, mate and interact with us. Like common dolphins they will ride the boats wake and can be very acrobatic. However being much larger they are a very impressive sight, especially when they leap clear of the water close to the boat. With our large rear decks on the RIBs close to the water then we can get incredibly close to these animals whilst causing very little disturbance. We do however have codes of practice how we operate around them, but not everyone understands this. We did see an individual with a very bad injury to it’s tail stalk (highly likely from an impact), however thankfully we’ve continued to see this individual for the last couple of years. From observations it appears that it is being looked after by other members of the pod, so we’re always pleased to see it. See here for our blog about this individual a few years ago. 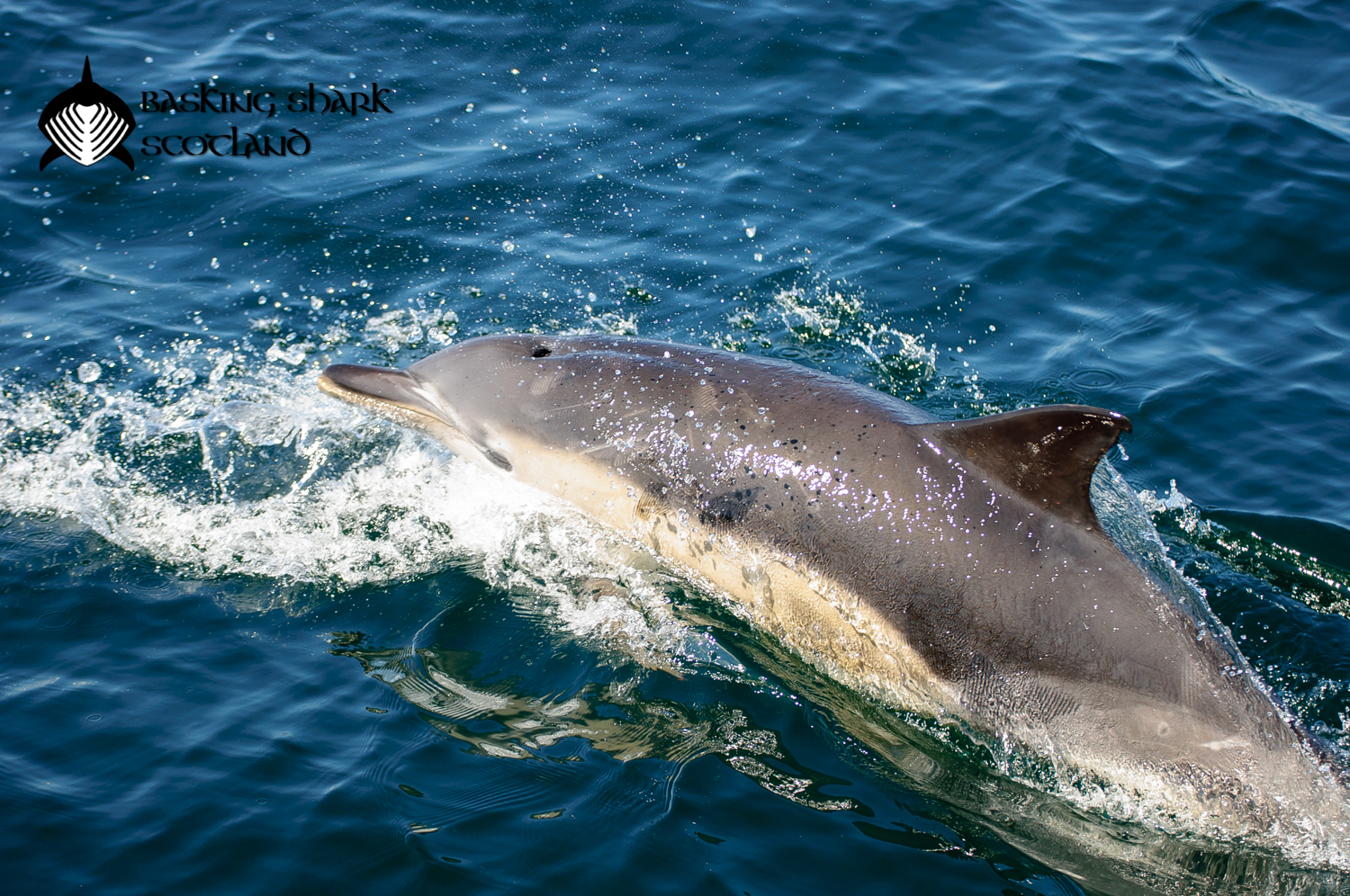 Short beaked common dolphins are one the more spectacular dolphins we see during summer. They are the classic dolphin shape with a lovely yellow hourglass pattern on their side reaching over 2m long. They’re highly acrobatic and actively seek out interactions with the boat. They visit the Hebrides usually in summer but sometimes offshore they can be seen year round. Usually they would be in open water away from the coast and during optimal feeding times can be seen in super pods of many hundreds. We can hear them communicating through the hull of the boat as they play and will brighten up even the lousiest of Hebridean weather. We filmed a pod beside the boat one summer using a go-pro only ( just holding it and sticking it in the water). We captured some really great underwater footage, See here for that video. 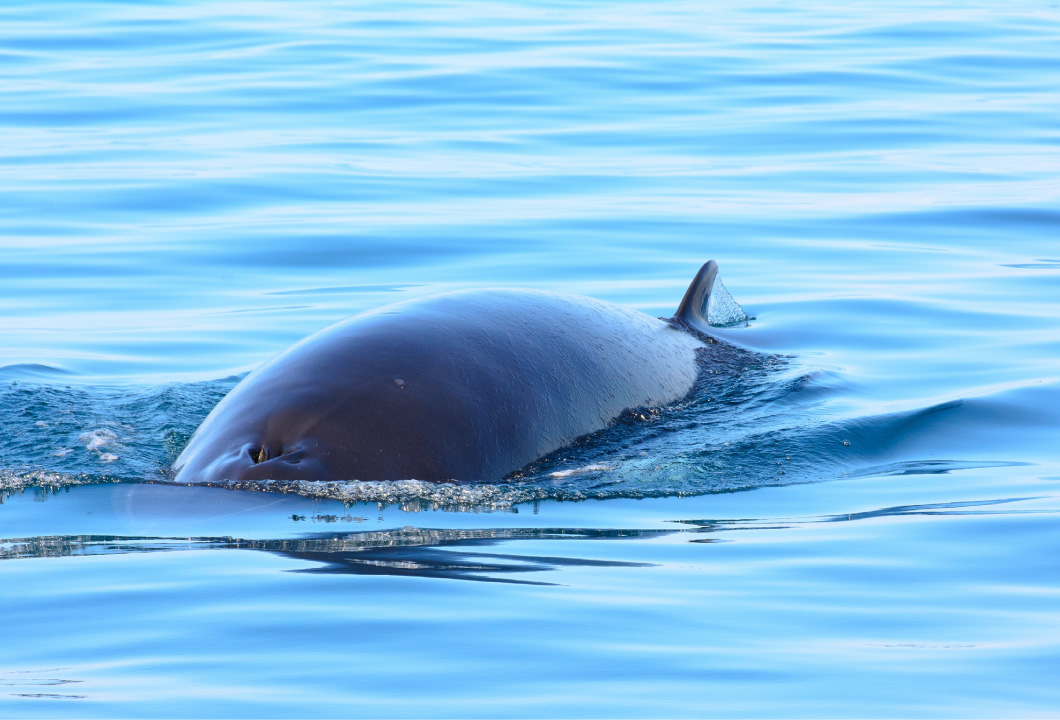 The minke is the most common of the whale species we see around the Hebrides, and during optimal conditions they can be very abundant. They grow up to around 10m long and are the smallest of the baleen whales we see around the UK waters (the pygmy right whale is smaller but lives in the southern ocean). Our minke's can come very close to the boat which allows you to see the white flashes on the pectoral fins as they swim under the boat. Surfacing to breathe a few times in-between dives, they are not usually a very long diver so we can see them at the surface after short intervals. During feeding events lunge feeding is exciting to see, they are also known to breach but we haven’t seen that ourselves (yet!). They are normally found around areas of deep water, but we have seen them in very shallow water (<15m over sand) which was a very strange occurrence! Our favourite encounter was when we spent a few hours with one individual during calm seas. Our dingy was on the back of the boat and was rubbing on the rib tubes with the water movement. This led to a squeaking sound which the whale found very interesting, so much so it hung around underneath the boat for ages! We have had very similar occurrence but never again as close as that -  you could have put your hand in the water and touched it! This is a cool video taken during some epic weather in the Hebrides when a minke came very close to the boat too. See here. 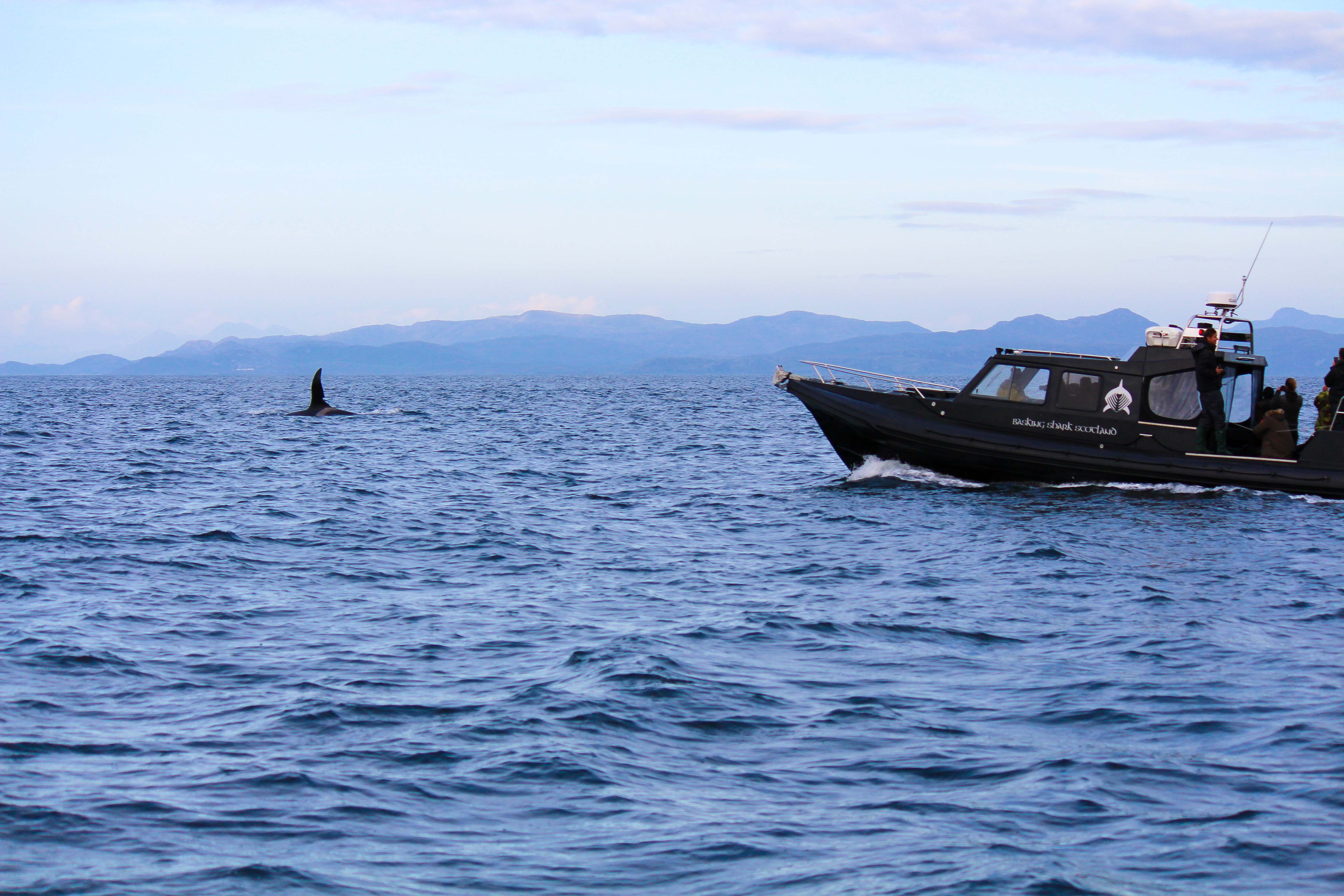 The champion of all cetaceans in the area we would argue! On the west coast we have a completely unique group of orca, however their existence is also a sad one. From studies, there are 8 individuals who belong to this pod, however there are only a couple who have been seen recently.  The biggest in the pod is John Coe, a bull of over 9m long who is a hugely impressive individual! With the unfortunate demise of Lulu in 2018, the results from the necropsy showed her tissues were so polluted with heavy metals that her carcass had to be disposed of as toxic waste. These orcas prey on a mixture of seals and small cetaceans, so feed on animals that are near the top of the food chain and individually already also have a high dose of contamination. This process is called bio-accumulation and unfortunately since these toxins are present in the ecosystem through human industrial legacy there is very little we can do about it. You need to be in the right place at the right time to come across these orca, they aren’t the animal that you go out and look for. Some people that have worked on boats in these parts all their lives have never seen them! They are dying out and will probably be extinct in our lifetime, so if you are lucky enough to see them, then you are truly privileged!

Risso’s are perhaps the most obscure looking dolphin that we see, in that they look quite different to the others. Their bodies have lots of scaring and heads quite different to the beaked head of the bottle/common. Their large dorsals can be spotted from a distance and they can be very acrobatic, but also they can be shy too. They are a large species and grow to nearly the same size as the bottlenose dolphins - just shy of 4m long. It’s only in the last couple of years, we have had more sightings of them around Coll & Tiree, as for many years we had no sightings whatsoever with them being more well know around Lewis. They are better known for inhabiting deeper water (due to their preference of food living there) however it's usually always been coastal locations we have seen them! Usually they have been in a pod of a dozen or more when we have seen them.

A few extras we couldn't leave out!!!! Only 5 was to hard to whittle down, here’s a couple of others that we feel need mentioned! 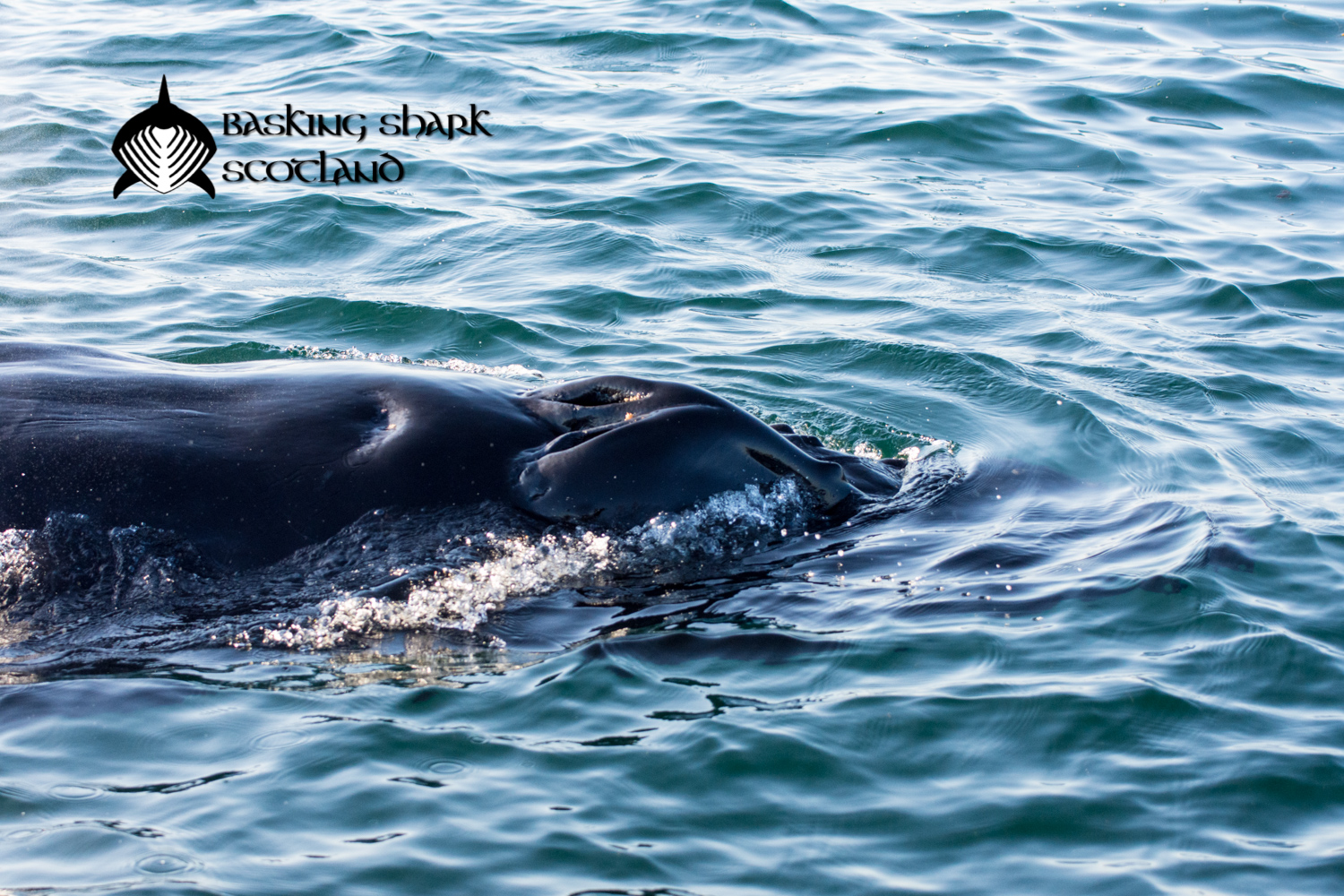 It does seem a shame to leave them out the main list as they are super awesome animals! But they are seen so rarely by us around the Inner Hebrides, then it’s only fair they shouldn’t be in the top 5. Humpbacks do come past the west coast on their migrations, and we would most likely encounter them out in the islands (you would think!). However the rare times we’ve seen them have been around the Oban coast, once when one ended up in the marina where we keep out boats, the other time just off Kerrera! Thankfully on both occasions they made their way out to sea unharmed! 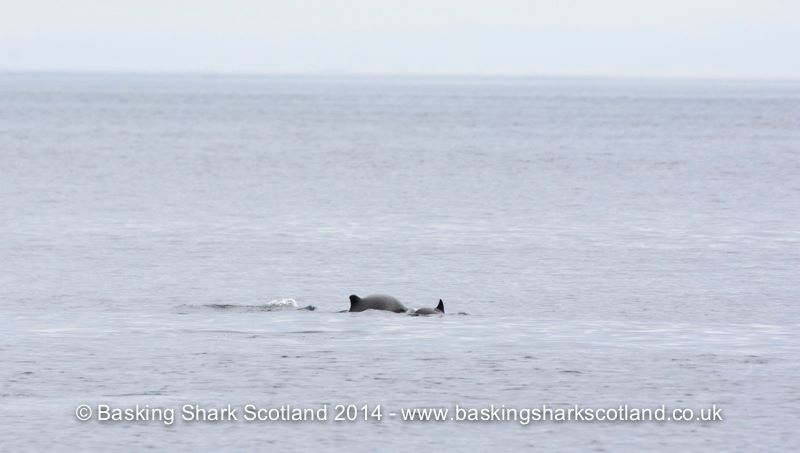 Porpoises (different to dolphins) are the least loved of our local cetaceans! It’s most likely as unlike the common or bottlenose dolphins, they are shy of boats and are not acrobatic and playful. Many people confuse them with dolphins when at sea and are disappointed when they don’t interact with us, assuming they will do a spectacular display! They are also very small with a max size of just under 2m. However they are numerous around the west coast, and we see them very often! Usually it’s during calm weather that we spot them as it’s easier to see them surface. However during feeding events we’ve seen them cruising down waves and very active whilst feeding. Rarely do they come close to the boat, but we have had them close during calm weather! Check out this video of them next to the boat here. 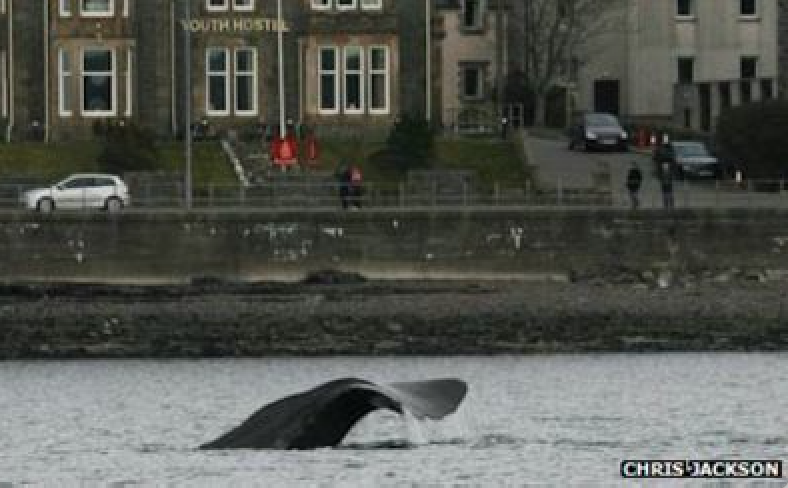 Not something we would expect to see very often out offshore in deep water. However even more unusually we had one visit Oban harbour in 2013. This individual swam into the busy harbour area and stayed for several days. It was a large adult and everyone was concerned that given the small area, constant boat traffic and tricky entrances that it may not end well for the whale. However one day it just headed off never to be seen again! How random! You could have been stood on the Esplande and watched the whale from there! Perhaps a similar occurance to the small Humpback we mentioned above! See here for a link to the story and some great video on youtube here.